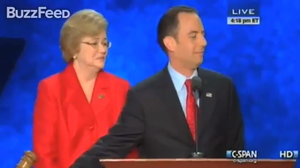 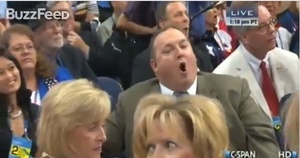 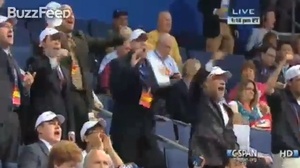 Meanwhile at The RNC:

As I was standing in line for a sandwich next to an Italian and a Puerto Rican correspondent, a controversy was unfolding on the floor. The RonPaulites, whose furious devotion to a single idea have made them the Ellen Jamesians of the right, were protesting a decision by RNC officials not to seat members of the Maine delegation, which was split between Paul and Romney supporters following rule changes made just prior to the convention.

There were energetic shouts of “Aye!” and “Nay!” as a Puerto Rican party functionary—Zoraida Fonalledas (top in red), the chairwoman of the Committee on Permanent Organization—took her turn at the main-stage lectern. As she began speaking in her accented English, some in the crowd started shouting “U.S.A.! U.S.A.!”

The chanting carried on for nearly a minute while most of the other delegates and the media stood by in stunned silence. The Puerto Rican correspondent turned to me and asked, “Is this happening?”