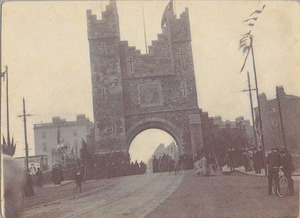 You’ll never get it.

Temporary gateway erected for the visit of Queen Victoria to Dublin in 1900. A ceremonial affair, the Queen was to enter the city boundaries and be given the keys to the city by the Lord Mayor and Aldermen. Described in The Irish Times as “the old city gates, a handsome representation of which is to be erected at the entrance of the municipal boundary at Leeson Street Bridge [Dublin].