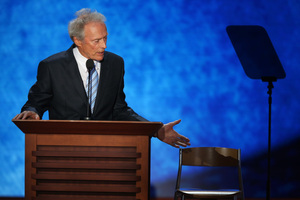 He went on to have a conversation with an empty chair – representing Mr. Obama – and criticized the wars in Afghanistan and Iraq and the president’s change of heart on closing the U.S. prison at Guantanamo.

“When somebody doesn’t do the job, you gotta let `em go,” Eastwood said before making a throat-slashing motion. Eastwood endorsed the notion that troops should return “tomorrow” from Afghanistan and erroneously suggested that is Romney’s position.

Did Clint Eastwood lose The Plot At Romney’s Convention? (Reuters)

And Him From A Nice Irish American Catholic Family Too