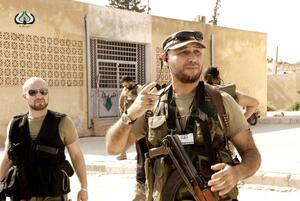 This morning on RTE R1 Myles Dungan (in for Pat Kenny) spoke with the Dublin-born head of security of the Tripoli Brigade, Husam Najjair (left), who helped topple Gaddafi in Libya.

Husam is the brother-in-law of Mahdi al-Harati (right) an Arabic teacher in Dublin and commander-in-chief of the brigade.

Husam is now considered a hero in Libya. He has recently been in Syria to help opposition forces there attempt to remove Bashar al-Assad.

He’ll also be at the Picnic.

Myles Dungan: “This revolution (in Libya) was televised. You were televised..you can see it on YouTube as I was looking at it last night, and you can see the progress that you made, that your brigade made from outside Tripoli into Tripoli itself. You come across as somebody who is a deadly accurate shot.”

Husam Najjair: “Thank you. It’s been..It’s not just highlighted, it’s been televised on Syrian TV and, you know, exaggerated to the point that they’ve put me down as one of the best snipers in the world. That I get paid millions, you know. In this moment in time, when you’re in the middle of battle, It’s do or die and you know people have asked me, some places people have asked me ‘have you killed somebody? how do you deal with?’.

Dungan: Well you have. I mean we’ve seen it on television.”
Najjair: “Yeah.”

Dungan: “How does that make you feel?”

Najjair: “As I’ve said many times before. If, to me, when injustice becomes law, resistance becomes a duty. And it’s a duty that you have to take. And that involves…”

Dungan: “That’s on an intellectual level, Husam. But on a human level? You’ve just shot somebody. You’ve just killed somebody? You’ve just ended somebody’s life? How does that make you feel?”

Najjair: “The people that I was fighting against I have no remorse for because they weren’t the kind of people that, you know, we had given them ample opportunities time and time again. If there wasn’t a humanitarian side of us, as a people, either approaching these forces and sending messages to them and telling them to lay down their arms. This is the will of the people. You cannot break the will of the people in a revolution, they will eventually get what’s their’s. It’s their land.”

Najjair: “You can always look at it that way but the way I looked at it was, these were people that were after making the decision to stand by and represent and fight for a brutal regime that at this stage had been extensively televised their brutality, the rapes they carried out, the mass graves, the massacres. So to actually put a gun by your side..because I had moments like. I’m doing a book at the moment, it’s due out next year. And to go through some of the parts in my mind. For example we were liberating a place called Tiji and this place was well known for its loyalty to the Gaddafi regime. But an old man came out from behind one of the buildings while I was, we were travelling through the streets, clearing out the streets. An old man came out from behind the building with his old-school Smith and Wesson pistol..and you could see that he was either old loyalist Gaddafi kind of thing. But he was brainwashed by him and I said to the man, I said ‘put down your gun old man. Put down your gun, it’s over.’ And he said to me, he said, ‘I’ll die before Gaddafi dies’. And he raised his gun to shoot us and the guys ended up having to kill him like, you know. It was unfortunate that we had to deal with people like this because it would have ended a lot quicker and without the bloodshed. Bloodshed is never, you know..”

Dungan: “The fate of Muammar Gaddafi. Obviously he was a tyrant. He was an autocrat. But the way in which he died. The manner of his death. Did you approve of that?”
Najjair: “I think you see, what you have to understand is that it wouldn’t have been the wish of..it was highly debated in Libya. It wouldn’t have been the wish of everybody. But people like me, we’ve seen the extent of his damage, you know. I..for example..this is all going to be in the book and should be interesting to some Irish readers..For example I captured a 19-year-old girl that had killed 16 men, right?”

Najjair: “She confessed. Because I brought her to the hospital.”

Dungan: “Why did she confess?”

Najjair: “I brought her to the hospital. Oh no, this..in the later, after questioning her and interrogating her and finding out who she actually was, she was one of his main snipers. She was in one of his main sniper units. So..and she confessed. And not only did she confess..a lot this has been highlighted since…about this girl in particular. When I walked into the room after I’d just heard the words, the guys just said to me, ‘look Sam, that girl that you brought in there, she’s just after confessing to 16 deaths’. When I burst into the room I had this incredible rage inside me. Every face had flashed in front of my eyes, all my mates that died, that guys that got shot in the head, shot in the chest. She was a sniper. Every one of them that flashed through my eyes…”

Dungan: “But you were a sniper swell?”

Najjair: “I imagined was her. And when I approached her I said ‘Why did you do it, like? Why did you shoot them? Why did you not shoot up, to the side, shoot to the left?’ I didn’t know that she was an army sniper. I thought she was just some girl. I was inquisitive but rage, full of rage. And she said to me, she said ‘well listen they had me at the window and they were sitting behind me and telling me ‘shoot or we’ll kill you’. They raped me by night and did that to me by day’. And so I had this big anti-climax in my mind. I had so much rage. I knew I couldn’t..that ultimately it was directed at Gaddafi. that Gaddafi made all these situations happen. Him and his henchmen were the ultimate cause of everything that is going on. So him dying in the way that he died I’ve no sympathy for him. Although, the way he was captured in an angry mob and stuff like that, it’s bound to happen like.”