Smyth, who has only 10 per cent vision because of an hereditary and degenerative eye condition – Stargardt Disease – was in a class of his own as he clocked 10.46sec on a warm, practically windless evening to successfully retain the T13 title he won in barely less emphatic fashion in Beijing.
On a night when Oscar Pistorius, the ‘Blade Runner’ himself, also took his bow, Smyth was in the mood to remind everyone that there are other shooting stars in the Paralympic firmament. At 25, running with a fluidity which is even the envy of his esteemed training partner Tyson Gay, Smyth brought the house down with his magnificent display.

Previously: The Fastest Paralympian On Earth Is Irish

Meanwhile, in the Aquatic Centre: 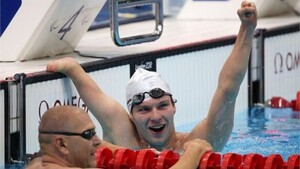 Darragh McDonald, 18, of the Asgard Club in Arklow, Co Wicklow after winning the 400 metres freestyle.

The First ‘Boo’ Of The Paralympics