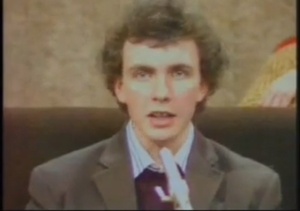 He was the David McWilliams of the Irish new wave scene.

Journalist John McKenna gave them a freakishly prescient introduction. “What can I say about these titans among rock & rollers?” he said. “The band for the future – the Eighties or Nineties, who knows? U2!”
His words may not be as memorable as Jon Landau’s “I’ve seen rock & roll future” line about Bruce Springsteen, but it’s still quite remarkable when you look back upon it. Just two months after this appearance U2 were signed to Island Records. That same month, they met with Joy Division producer Martin Hannett about possibly producing Boy. By a crazy cosmic coincidence, they happened to visit during the “Love Will Tear Us Apart” recording session. They wound up working with Steve Lillywhite, who they’ve worked with (off and on) for the past three decades.
But in January of 1980 not a lot of people were calling U2 the band of the Eighties, let alone the Nineties. John McKenna did, and we take our hats off to him.

Not The Title Of Olly Murs’ New Album