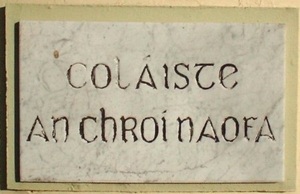 The National Board for Safeguarding Children in the Catholic Church in Ireland (NBSCCCI) today released seven reports into four dioceses and three religious congregations.

It looked at 330 allegations of abuse involving 146 clerics.

The audit into the Missionaries of the Sacred Heart in Ireland concluded:

“Two basic principles underpin the current Church safeguarding policies in force in the Catholic Church in Ireland today. They are that children should be protected from harm and those that cause harm to them or allow it to happen, should be held accountable for their actions. The investigation of the child protection practice in this religious community is an excellent example of why those principles are now in place in the Church in Ireland, and why they must be adhered to by everyone within the Church without exception.”

The Missionairies of The Sacred Heart (MSC) , which ran the former boys’ boarding school Colaiste and Chroi Naofa in Carrignavar, Co Cork.

the NBSCC noted:
On July 16, 2011 Senator Mark Daly used Seanad privilege to reveal allegations of abuse at a Cork boarding school. The Sacred Heart made a statement the following day, saying all allegations had been sent to authorities.

In a short time, this turned out not to be the case.

The NBSCC also found files containing records of priests admitting abuse were not sent to Gardai or HSE.

There were gaps in case files and, in some cases, documentation of meetings were missing.

It was decided the MSH would be given a week to search for missing documents while the NBSCC suspended their review for a week.

But this proved unsuccessful and no new records were found in that week.

The case files that were present showed there were allegations against 17 alleged perpetrators.

Nine of the 17 have admitted to abuse.

Six of the 17 have died and three have left the priesthood.

Of the 17 – six worked at the Cork boarding school (Colaiste an Chroi Naofa in Carrignavar) although not all at the same time.

The MSC also had a boarding school in England where allegations were made against one priest, who later worked in Colaiste an Chroi Naofa.

He was subsequently moved to the Midlands, where more allegations were made against him.

He was tried and convicted and served time. He [understood to be Tadgh O’Dalaigh} is no longer a priest.

The total number of victims is unknown but the number is growing.

One victim of abuse died by suicide and in his file it was noted the abuse was “a contributing factor if not the main cause of his death”.

One victim was warned that if he persisted with his allegation, legal action would be initiated.

Missionaries Of The Sacred heart: The Final Report (PDF)