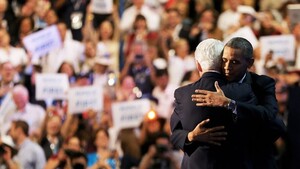 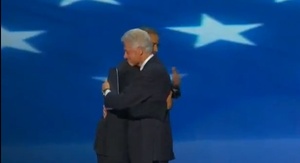 He made only a quick reference to his wife, drawing laughter from the crowd as he raised another attribute of Mr. Obama, declaring:
“Heck, he even appointed Hillary!” For Mr. Clinton, the speech dramatized the evolution in his relationship with Mr. Obama, from bitter antagonism to cautious embrace and now a full-throated endorsement. People who know both men do not play down the lingering tension between them, a legacy of the 2008 Democratic primary, when Mr. Obama defeated Mrs. Clinton in a fierce battle that seemed to leave Mr. Clinton more wounded than his wife.

“President Obama beat Hillary Clinton for the nomination,” said Rahm Emanuel, the mayor of Chicago, who worked for both “President Clinton loves his wife. It took him a little longer to get over it; she got a job.”