On Saturday, Gardai looked on as shots were fired in Donaghmede, Dublin. 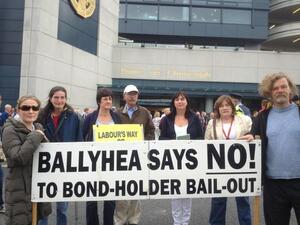 Gardai prevented Ballyhea protesters (above) from handing out leaflets outside the All-Ireland hurling final in Croke Park, Dublin, calling it a “health and safety issue”.

This is what I have learned today, that I live in a city where paramilitaries can stage a show of strength under the eyes of the Gardaí, after earlier firing shots over the house of a slain terrorist and criminal, and have no action taken against them, but the attempted distribution of leaflets at a GAA match criticising the actions of the Government is now a public order offence of such enormous proportions that it must be disrupted immediately.