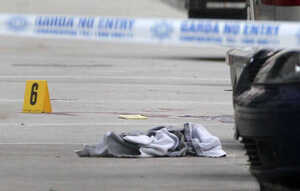 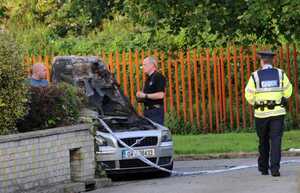 Paul Stewart was a friend of Alan Ryan who was shot dead in Donaghmeade, Dublin last week. Paul and another companion Aaron Neilis were with the Real IRA chief when the shooting took place.

The death, and Ryan’s subsequent paramilitary-style funeral has caused much controversy. Stewart went on Liveline yesterday on RTE R1 to speak with Joe Duffy about his version of events on the day Ryan was shot.

Joe Duffy: “You were at the funeral of Alan Ryan on Saturday. But you were with Alan Ryan when he was murdered.”

Paul Stewart: “Yeah I was, I was with Alan when he was killed. And then I was delighted with the way the funeral went. I think he was given a very dignified send-off by his friends and by his comrades and I was delighted for the family, with the respect that he deserved.”

Duffy: “And by the way how is the other man who was shot. Because I mean he had a serious.”

Stewart: “He was a friend of Alan’s and he was shot in the leg swell.”

Duffy: “But I’m told the injury he had was extraordinarily painful swell.”

Stewart: “Yeah the bullet shattered his femur. he was… grazed..One of them grazed his cheek so he’s very, very lucky to be alive. And I think what it shows is the gunman had absolutely no concern for anyone who was a bystander. He was obviously out to just kill whoever he could, aswell as killing Alan.”

Duffy: “And what, the three of ye were just walking along in the afternoon?”

Stewart: “Yeah we were just going to see a friend. And then we were essentially ambushed by a gunman who was just out to kill Alan for the anti-drugs stance he’s taken in the community.”

Stewart: “Em..yeah. I don’t particularly want go into the details you know. But yeah, I witnessed it.”

Duffy: “And when did you realise it was a catastrophic situation you were in, Paul?”

Stewart: “Well I think it became clear very quickly what had happened, you know, so. Unfortunately the gardai didn’t happen to respond too quickly. It took them nearly 15 minutes to arrive on the scene and when they did some of them were laughing. Some of them were making jokes about the fact Alan had been killed. They were laughing at me personally. They showed absolutely no concern for the fact that Alan had been killed which is why, you know, I’ve no real interest in talking to them about what happened.”

Duffy: “And will you be co-operating with the gardai in the investigation?”

Stewart: “Again I don’t see any real merit in doing that. I don’t think the gardai have any real interest in catching who did it. Again I think the gardai are complicit in Alan’s murder. Alan was under nearly 24-hour surveillance and yet his killer somehow managed to allude the gardai. There was no garda helicopter scrambled after it, which was very unusual. The gardai took an extraordinary long time to actually arrive at the scene. And when they did arrive at the scene, they were mocking the fact that Alan had been killed.”

Duffy: “And have you been with Alan before when he was trailed by gardai?”

Stewart: “Absolutely again, for Alan, I mean anyone who knew him, Alan was under almost 24-hour surveillance. I mean myself and Aaron were stopped and searched that day by the gardai, our details were radioed in, we were under surveillance in Dublin. And I find it very hard to believe that the gardai didn’t know what was happening and the gardai didn’t see Alan being killed. I honestly do.”

Duffy: “Well how soon did the other emergency services arrive?”

Stewart: “They took about…they were there slightly after the gardai.”

Duffy: “So the gardai got there first?”

Stewart: “Yeah but that area that Alan was killed in, that area is saturated with gardai normally, you know. There’s a number of republicans who live in the area who are also under frequent surveillance. So we find it very hard to believe that the gardai would take such a long time to get there when normally they seem to be able to arrive in minutes – to arrest or harass republicans.”

Duffy: “But they were the first emergency service there, Paul?”

Stewart: “Well I’d expect them to be given the number they have in that area. Yeah I’d be very shocked if they weren’t you know? They had Alan under almost constant surveillance yet it took them so long to arrive, I think they’ve got questions to answer.”

Duffy: “And was it obvious? Because there’s photos in the paper, as you know. Was it obvious that Alan was dead on the scene?”

Stewart: “I think Alan was, Alan probably didn’t know what had happened. I think Alan was killed very quickly, you know, thankfully. And eh, but, nonetheless I think the gardai…”

Duffy: “No, no you’ve made that point. I don’t know how anyone would ever prove what you’re saying, the conspiracy theory that you’re putting forward.”

Stewart: “I saw the car driving away, yeah.”

Duffy: “Did you tell the gardai the type of car or whatever?”

Stewart: “The gardai, again, the gardai know all the details of what happened. The car was found burnt-out. There’s nothing I can tell the Gardai that they don’t already know.”

Duffy: “And it was a gunman on his own?”

Stewart: “Yeah it was a gunman and a driver yeah.”

Duffy: “Gunman and driver, my God. So, you’re..So.. Alan is shot dead, Aaron Neilis is seriously injured and in great pain because they shot him in the femur. The fire brigade arrive. And who took the photographs?
Stewart: “I’d like to know as well but I think that it’s absolutely disgraceful. I was told by a journalist that they were selling those photographs for    €400 each and, to be honest, I think it’s one of the most despicable things I’ve seen. Whatever you think about Alan, Alan had a family, he had a wee girl.”

Stewart: “It’s shocking that he was killed but it’s not entirely surprising that the drugs gangs were so in fear of him.”

Duffy: “And you’re adamant that it was the drugs gangs that killed him.”

Stewart: “I don’t think there’s any doubt that that’s who was responsible. I think that’s fairly clear yeah.”

Duffy: “And are you seriously trying to tell me that the gardai were colluding with drugs gangs?”

Stewart: “I wouldn’t be one bit surprised. I mean it’s entirely in the gardai’s interest to have the drugs gangs and republicans at each others’ throats.”

Duffy: “There seems to be two areas of complaint. Well you have three in fact, if you’re saying the gardai weren’t there quick enough on the Monday. But you say outside the family home in Donaghmede and at the church, you weren’t happy with the garda presence.”

Duffy: “What are you saying they were saying to you, Paul?”

Stewart: “Members of the Special Branch were joking, saying ‘oh The Model’s dead’ and laughing at his friends. Now I would like to point out ordinary gardai looked disgusted, I think members of the Drugs Squad expressed their disgust at what the Special Branch had done. I know that there’s other detectives that felt disgusted at what the Special Branch.. and the antics they got up to at the scene and outside his mother’s house. But they absolutely disgraced themselves. As usual, they’ve no concern for anyone, they don’t really care about republicans and I think they just behaved like animals on the day.”

How Are Things In Glocka Morra?

They’ll Make A Martyr Out Of You