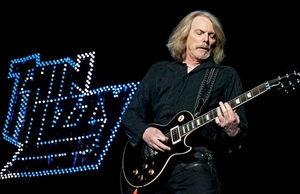 Thin Lizzy are set to record their first album in nearly 30 years, and their first without original frontman Phil Lynott, HotPress.com reports. Guitarist Scott Gorham (above) said the group will work with producer Kevin Shirley on the new album, and that recording will likely start next month. “I’ll be going out to Los Angeles at the end of the month to work on some songs with [guitarist] Damon [Johnson] and then I think we will start recording in October in our producer Kevin Shirley’s studio,” Gorham said.

But only if Jim Fitz does the artwork.

It’s Not The Same Honey When You’re Not Around