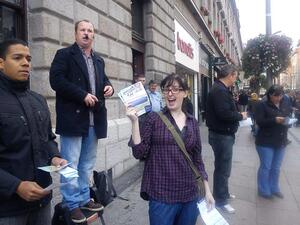 Sarah Malone on O’Connell Street, Dublin, earlier, handing out leaflets for The March for Choice (next Saturday, September 29).

He [with headset] noticed us and started shouting at us about abortion, and talking about how you can see fetuses online ripped to pieces, so I stood in front of him making my thumb and index finger into a little circle to show the size of a fetus at 12 weeks…. anyways, crowds gathered, photos were taken (this one by some lovely opportunistic teenage atheists), flyers were handed out and good times were had by all.

Apparently they make merchandise when they’re not hassling women. He called me a murderer and said that women who face serious illness during and as a result of pregnancy should just suffer it. This was after listing a massive number of chronic illnesses that are worsened during pregnancy. He actually used those words “they should have to suffer”.

He was all ‘google it, google it!’ and I turned around and was like ‘dude if you’re going to lie to them don’t tell them to check it on the internet, yeah? cause you know what you’re saying isnt true and theyll find that out when they go on google’

Thanks to this lovely God-botherer shouting at us this afternoon I’d say we handed out twice the amount of March for Choice flyers we thought we would.Thanks, dude!.

Live From The ‘March For Choice’

How Many Were At The March For Choice?