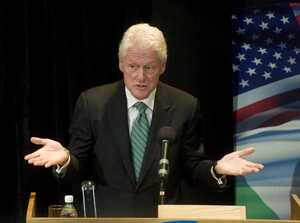 Former US president Bill Clinton says he could in theory run for president in Ireland or France — but admitted his bad French would make him “toast” in an election there.

The 66-year-old, who served two terms in the White House from 1993 to 2001, said his Irish heritage made him eligible to run for office there, while the fact he was born in Arkansas means he could enter a Gallic poll race.