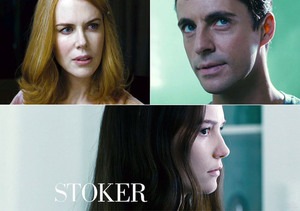 1. Acclaimed Asian director Park Chan-wook did the classic Oldboy (2003), soon due an ill-advised remake from Spike Lee. Now Park is making his belated US film-making debut.

2. Nicole Kidman’s been associated with more turkeys over the past than Bernard Matthews; now she appears to be going through her Joan Crawford phase.

3. Name that face, Part One: Kidman’s daughter is fellow Aussie Mia Wasikowska, from Alice In Wonderland (2010) and Albert Nobbs.

4. Name that face, Part Two: Wasikowska’s creepy uncle with the excellent eyebrows  is Matthew Goode, from Watchmen (2009). Tom Cruise would have been a better choice.

6. Forecast: promising, with the likeliness of scenery chewing.