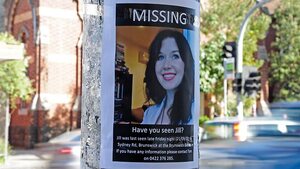 A 41-year-old Coburg man was arrested this afternoon and is currently in custody assisting police with their enquiries.

Earlier today a man captured on CCTV footage which also shows the last-known images of Ms Meagher urged others in the vision to come forward.

Dan Gregson is one of six people visible in the security camera footage, which shows Ms Meagher walking down Sydney Road in Melbourne, after leaving a bar in the early hours of Saturday morning.

Police are particularly interested in talking to a man in a blue hoodie who can be seen talking to Ms Meagher.

Just a minute or so earlier, Brunswick local Mr Gregson can be seen walking down the street.

Mr Gregson has told police he does not recall seeing Ms Meagher or the man in the blue hoodie, but he is urging others shown in the footage to come forward.

“I guess I’m a bit surprised that others haven’t [come forward]. I don’t know whether they’re of the same opinion as I was, where they don’t think they saw or heard anything, it’s not worth coming forward, but if you’re in the footage call Crime Stoppers,” he told the ABC.

“One of the things I said to the detectives yesterday was that the guy, you can see in the footage he walks past me at some point, I don’t remember his face,” he said.

“Generally I seem to clock anyone who looks a little bit unusual but I certainly don’t remember the guy’s face and vaguely remember walking past.”