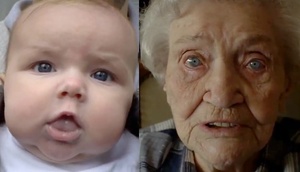 In October 2011 I started documenting people in the city of Amsterdam, approaching them in the street and asking them to say their age in front of the camera. My aim was to ‘collect’ a group of 100 people, from age 0 to 100. At first my collection grew fast but slowed down when it got down to the very young and very old. The young because of sensivity around filming or photographing children and the very old because they don’t get out of the house much. I found my very old ‘models’ in care homes and it was a privilege to document these -often vulnerable- people for this project. I had particular problems finding a 99 year-old. (Apparently 100 year-olds enjoy notoriety, but a 99 year-old is a rare species…) And when I finally did find one, she refused to state her age. She simply denied being 99 years old! But finally, some 4 months after I recorded my first ‘age’, I was able to capture the ‘missing link’ and conclude this project.

What No Woman Over 30 Should Wear