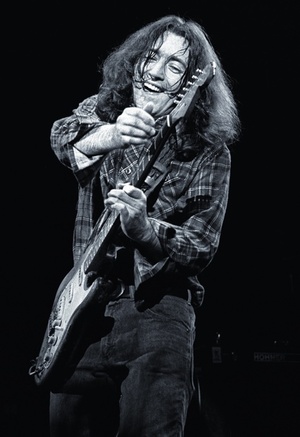 Rory Gallagher was a fifteen-year-old schoolboy in Cork when he first laid hands on the guitar that would be associated with him for the rest of his life. The year was 1963 and the guitar was a 1961 Fender Stratocaster (Sunburst Model). Rory bought it secondhand on hire purchase, for £100…

Michael Crowley, late proprietor of Crowley’s Music Centre in Cork, remembered the young musician visiting his shop on Merchants Quay, right on the banks of the River Lee.

There was a new Stratocaster in the window. “Rory called in with his mother, who asked what price was the guitar? Including the case at the time, they were £129. When she heard the price, she said to Rory, “That’s rather expensive, like, would anything else do?” We had a man working here at the time, his name was Seamus Long. Seamus was a great salesman and he interjected and said, “How about one of the Hagstroms?” Rory shook his head and said, “No!” He was only fifteen, which was very young for somebody to be into a guitar of that type, but he obviously knew what he wanted…”

[Rory recalled]: “I’ve had it re-fretted a couple of times but apart from that very little has been done. I had it stolen one time, following a brief appearance at the Five Club to visit Pat Egan about the Dublin scene, and it got very beaten up then. I had borrowed a Telecaster, and it and the Tele were nicked. I was terrified for a few days in case I would have to buy both a Strat and a Telecaster. Both guitars were found (with the assistance of some exposure on Garda Patrol on RTÉ) behind a front garden wall on the South Circular Road, with some of the strings missing and the bodies knocked about but, thankfully, they were OK.

“I don’t even call it a woman’s name or whatever: it’s just where I came from, to own a Stratocaster was like monumental – it was impossible. There’ll be arch battles for as long as we go on about the warmth of Les Paul guitars and the twang of a Telecaster and all that, but I would panic before I go on stage without this guitar – it would have to be a Strat and this one in particular.’” 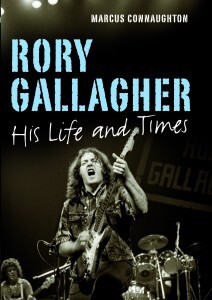 From Rory Gallagher: His Life And Times by Marcus Connaughton (Collins Press). On sale now.

Rory And Phil: The ONLY Picture