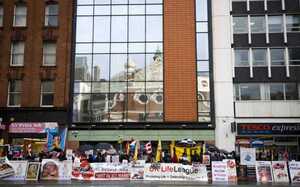 Among the crowd in Belfast this afternoon.

One protester, James Dowson, who had travelled from Scotland to represent the UK Life League, said the clinic was “a money-making business” and “a gruesome deadly business that deals with the killing of unborn children”.

“We are here today to show solidarity with the people of Belfast,” he told AFP.

“Marie Stopes is not wanted here, it’s not wanted on the island of Ireland, north or south, where the people have repeatedly opposed and rejected abortion, but still these people, these internationalists, have come here.” 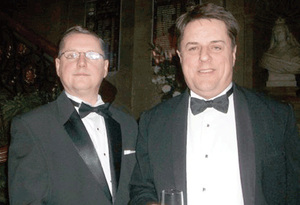 The controversial former BNP fundraiser [above with BNP leader Nick Griffin, right]  and convicted thug not only runs his own fascist organisation to rival the BNP, he’s also the main fundraiser for the rival English Democratic Party.

A controversial and unpleasant character, Dowson is the pit of all dubious far-right funding in the UK. His lust for publicity seems to have no limit.

Dowson turned up at the demonstrations as a self proclaimed “Christian” minister as well as the head of another organisation that he claims to lead, ‘The UK Life League’.

A Message For Marie