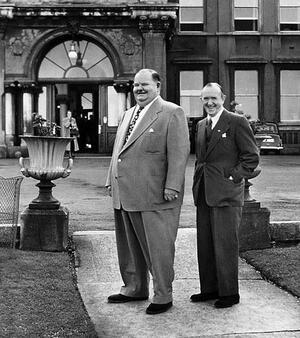 Oliver Hardy and Stan Laurel outside the Royal Marine Hotel in September 1953.

The two comedians arrived in Dublin virtually unnoticed. Last night at the Royal Marine Hotel where they are staying, a reporter found Stan Laurel and his wife at dinner.
“Ollie is resting, ” said Stan, “We had a terrific heatwave in New York before we left and it was just too much for him.”
The reporter went on to say Stan and Oliver will rest until Monday morning, when they will be joined by a scriptwriter from London. For the following fortnight they will think up scripts for their show. “We are thinking of calling it ‘Birds of a Feather’ but we may change that title”, said Stan. Their show will go on a 12-month tour of British theatres. “We will be appearing in Belfast but I do not know about Dublin yet” Stan added.
………The cast, which will take part in the show, will arrive in Dublin in a fortnight’s time and will rehearse in the Olympia Theatre, where the two comedians appeared last year during their first visit to Ireland. The scenery for the show is being made in Belfast and will be brought to Dublin for the rehearsals.
Laurel & Hardy would have rehearsed in England but for some labour restrictions, which prevent them from going there until October.
“From what I have seen of Dun Laoghaire,” said Stan Laurel; “it seems to be a beautiful spot”. The reporter noted that he had some trouble with the pronounciation.