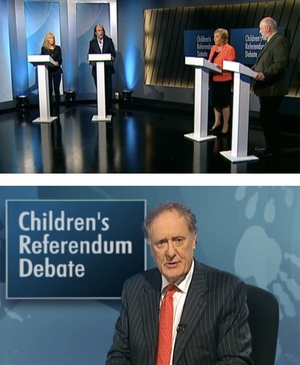 I’ve just seen your panel [top from left: Kathy Sinnott, John Waters, Frances Fitzgerald and Fergus Finlay] for tonight’s debate [on TV3] on the Children’s Rights Referendum. There are plenty of us who oppose this referendum other than for religious reasons. To exclude our voices from your programme will mean that your debate is unbalanced before it even begins.
With respect to John Waters and Kathy Sinnott, some of whose concerns I share, they are unlikely to represent the views of people whose definition of family would include same-sex parents/guardians and unmarried parents/guardians many of whom also oppose this amendment.
I have been the national coordinator for a campaign (on behalf of the member organisations of Inclusion Ireland) aimed precisely at securing just a few basic, legislated rights for children and other people with disabilities and I can tell you categorically that neither Fine Gael nor Labour would commit to unequivocally support that objective.
So much for their conviction to rights for children.

This amendment will do nothing to help secure those basic rights…

The ‘No’ Campaign Starts Here!