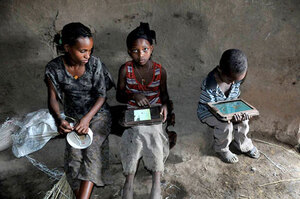 The One Laptop Per Child project, a non-profit outfit that has so far delivered 2.4 million XO laptops to children in the developing world, reported recently on their efforts in Ethiopia.

Rather than give out laptops (they’re actually Motorola Zoom tablets plus solar chargers running custom software) to kids in schools with teachers, the OLPC Project decided to try something completely different: it delivered some boxes of tablets to two villages in Ethiopia, taped shut, with no instructions whatsoever. Just like, “hey kids, here’s this box, you can open it if you want, see ya!”

“We left the boxes in the village. Closed. Taped shut. No instruction, no human being. I thought, the kids will play with the boxes! Within four minutes, one kid not only opened the box, but found the on/off switch. He’d never seen an on/off switch. He powered it up. Within five days, they were using 47 apps per child per day. Within two weeks, they were singing ABC songs [in English] in the village. And within five months, they had hacked Android. Some idiot in our organization or in the Media Lab had disabled the camera! And they figured out it had a camera, and they hacked Android.”