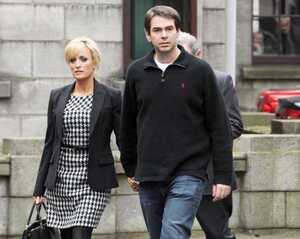 Sean Quinn Jnr and his wife Karen Woods following his release from Mountjoy..

So, is Sean Quinn Jr now up for the title of the sexiest man in the country? Completely arbitrarily, and using no scientific methods whatsoever, I consulted some friends and acquaintances of both sexes and varying ages for their opinions. In the main the men were in favour. The other half admitted that Quinn Jr was now seen as a “man’s man” after doing his time without complaint and getting on so well with the hard blokes in the Joy. Two female friends said that yes, the sight of him all casual in Ralph Lauren emerging from jail, looking far more handsome than he went in, had caused them to stop and think “yes, I would”.

In general the consensus from my impromptu straw poll was a dawning comprehension that, yes, Quinn Jr had gone to prison a boy and emerged a man, and that this was a very attractive quality indeed in a country which so desperately needs a hero or two.

Quinn Jr Was A Boy Going To Jail — But He Came Out A Man (Carol Hunt, Sunday Independent)

“I’d Have To Lie…That Wouldn’t Overly Worry Me.”

They Threw The Good Book At Him

Audi In Time For Christmas