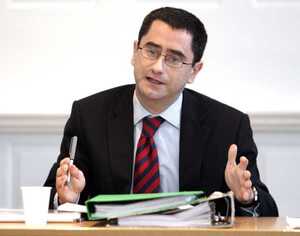 Above: John McCarthy, Principal Officer of Economic Division at the Department of Finance at yesterday’s technical briefing on the Medium Term Fiscal Statement.

There will be no extra austerity beyond the €3.5 billion already planned for next month’s budget despite a substantial downgrad in the Government’s growth outlook.

In its Medium-Term Fiscal Statement, released by the Department of Finance yesterday, the Government said “all options” were being considered for the budget, including social welfare cuts, a broadening of PRSI and a reduction in the public sector pay bill.

For 2013, the Department of Finance has downgraded its gross domestic product growth forecast by 0.75 of a percentage point to 1.5 per cent, reflecting both sluggish domestic spending and a worrying international economic backdrop.

Now THIS Is How You Debate A Budget

Where The U-Turns Have U-Turns