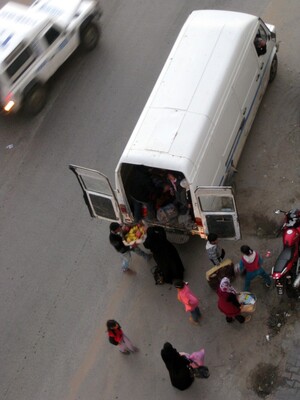 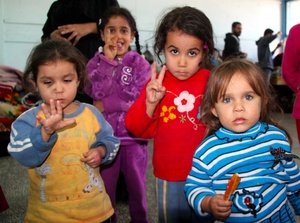 The Attara children take refuge in an UNRWA (United Nations Relief Works Agency) camp in a Gaza school this week.

Gisela Schmidt-Martin, who works for The Palestinian Centre for Human Rights in Gaza, writes:

Last Tuesday evening, Israeli F16s dropped leaflets in Northern Gaza and parts of Gaza City, instructing people to leave their homes and follow certain routes to ‘safe’ areas. In the hours that followed, around 10,000 people became displaced. The following day, a colleague and I visited the New Gaza Boys Preparatory school, an UNRWA school on Nasser Street, where 1,800 people took refuge.

We spoke to Mahmoud al Attar who had moved into a small classroom with 36 members of his family. Here is a narrative account of his experiences over those 24 hours. Mahmoud’s granddaughter, Maram, is four years old, the girl in the red jumper (above). When I kneeled down beside her sleeping baby brother, Maram immediately launched herself into my arms and gave me the warmest, tightest hug I have received since I arrived in Gaza. It was all I could do not to cry.

She clung to me, then looked up at my face with a broad smile on her face. For the next while, as long as I was in the classroom, Maram was constantly at my side, holding my hand, clinging onto my legs, and smiling (though she looks serious in her photograph).

Her cousin, Thawra, who is three, is on the left. She had a black eye and some cuts on her face from three days before. She tried to run when a missile struck near her home but fell down, hurting herself. The older children were entertaining themselves by drawing pictures on the chalkboard.

Sadly, these pictures showed tanks, shells, warplanes, and a man with his leg cut off. The loss of innocence is nothing short of tragic. The Attara family spend part of Operation Cast Lead, which took place less than four years ago, sheltering in the same school.

Later on Wednesday evening, at around 8.30pm, we got word of the ceasefire, but we were sceptical until we saw the Egyptian Foreign Minister Mohamed Kamel Amr stand up beside US Secretary of State Hillary Clinton to announce the deal.

We gradually allowed ourselves to hope that it was real. 9pm passed and we heard a few more explosions but, little by little, the ceasefire seemed to take hold and the neighbourhood began to come slowly back to life.

Soon, we were listening to the sounds of fireworks, car horns, ululating, and the traditional celebratory gunfire. We couldn’t resist going out to join the party so we met some friends, piled into their car, and drove around the crowded streets, enjoying the sheer joy we were witnessing. There were flags of every faction being waved proudly alongside the Palestinian flag. To everyone we passed, we cried, ‘Ilhamdullah salaama!’, and exchanged the sign of V for victory.

Indeed, if the terms of the agreement come to pass, the buffer zone is removed, the closure is lifted, and serious negotiations for a free Palestine begin to take place, for the people of Palestine, it will have been a victory indeed.

However, the signals from Israel have been mixed. On the one hand, it is reported that restrictions on fishing and farming have been eased. But, in stark contrast, Israeli soldiers already broke the ceasefire on Friday, killing a young Palestinian man, 20-year-old Anwar Qudaih, in the border area near Khan Younis, and injuring 19 others. And last night, close to 3am, Israeli naval forces once again fired in the direction of fishermen who were working at sea, forcing them back to shore.

These acts of aggression threaten to destabilise the fragile truce agreement and undermine the confidence of the people of Gaza that anything has changed. 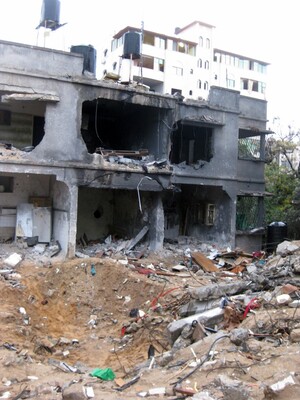 The site of the al-Dalu family home, in which 10 members of one family and two neighbours were killed. 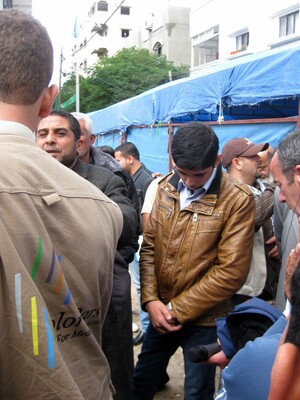 Abdullah al-Dalu, 18, one of the only surviving members of the al-Dalu family

I spent yesterday afternoon visiting some of the many sites of destruction which are now scattered throughout the Gaza Strip. One such place was the family home of the Al-Dalu family, a name now famous for the horrors inflicted on the family just one week ago.
On Sunday afternoon, 18 November 2012, though fearful of leaving the house due to ongoing airstrikes in the area, Jamal Mahmoud Yassin al-Dalu (52), ventured out to buy food for his family. By the time he returned, his home had been destroyed. An F16 missile struck the house in al-Nasser Street in the north of Gaza City and killed 10 members of the al-Dalu family. 8 of them were pulled from the rubble that day, including Sarah (7), Jamal (6), Yousef (4), and Ibrahim (1). The bodies of their mother and three other women were also recovered that day.

Several nearby houses were damaged in the attack, and two neighbours belonging to the al-Muzannar family, an elderly woman and a teenage boy, were also killed. Additionally, 9 civilians, including 2 children and 3 women, were wounded in the attack.

When I visited the ruins of the family home, the 9azza was taking place for Yara and Mohammed. The 9azza is the three days of mourning after the funeral, during which family and friends visit to pay their respects. There were many members of the media present and the father of the family, Jamal, gave an interview to a television station. As he spoke, his 18-year-old son, Abdullah, stood next to him with his head bowed. I didn’t see him look up once.

The trauma of the eight days of the Israeli offensive on the Gaza Strip will continue to leave a deep impact on the people for many years to come.
For any child older than four, this was already their second war. Any men and women my grandmother’s age have lived through many more traumatic experiences, beginning with the Nakba of 1948, when an estimated 700,000 Palestinians were dispossessed of their land. 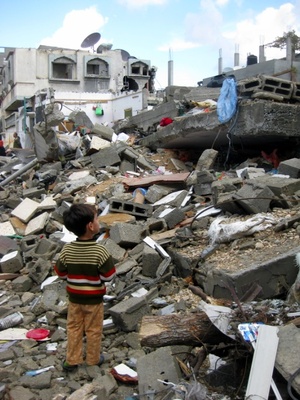 A young child surveys the damage, on the ruined site of the Abu Foule house in Jabalia. 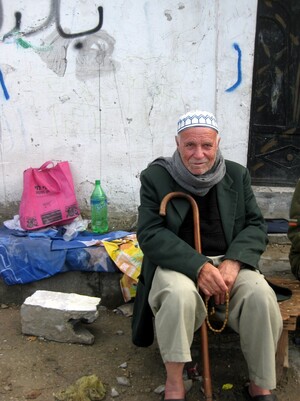 An elderly man sitting on his step, next to the Abu Foule house.

The Palestinian people are strong, toughened by their prolonged and unjust suffering. But they are still vulnerable to fear and pain, and they continue to thirst for justice, freedom, and dignity.

When I was sleeping on Thursday evening, thunder began to roll. I awoke, afraid the F16s had returned. A touch of the old PSTD, perhaps. Thankfully, it was huge storm with thunder, lightning and torrential rain.

It rained heavily again over the following days, washing away the dust and fumes, but unfortunately also helping the toxic residue of more than 1,400 Israeli missiles to seep into the soil and water table. The damage of this offensive is yet untold and it will be a long recovery.