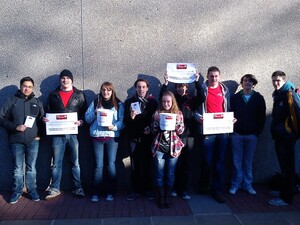 The UCC branch of the Labour Party [some members above] has this afternoon held a ‘charity collection’ for UCC President Michael Murphy who has said that he is struggling on his salary of €232,000 per annum.

We are calling on the government to implement a progressive budget that promotes the concept of equality.

It is over-paid people like UCC President Michael Murphy who should be targeted in Budget 2013; not students who rely on grants to get through college.

“Money raised from the ‘charity collection’ will be donated to UCCSU’s Student Hardship Fund,