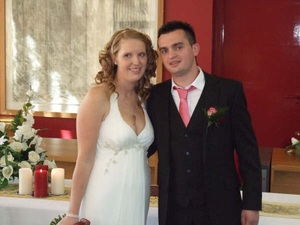 Julie and Mark Marku  on their wedding day in 2009.

My husband Mark was arrested in Crete, Greece, on September 16, 2010 and has been languishing in prison ever since.

Mark and his younger brother Andreas spent 16 months in pre-trial detention before being convicted, in January 2012, of  being a member of and armed gang that committed seven armed robberies of jewellers in Crete during the summer of 2010.

Both brothers were sentenced to 18 years in prison. Since the day of my husband’’s arrest, the case against him has been riddled by inconsistencies and just plain illogical accusations that are completely unsupported by any evidence.

Mark’s defence included social welfare records, wage slips, legal affidavits, flight tickets and passport stamps from Ireland, all of which proved irrefutably that he was in Ireland when they said crimes took place.

The prosecutor claimed the Irish documents were falsified, a claim accepted by the judge without investigation.

The fact that Irish state and legal documents such as social welfare sign-on sheets and legal affidavits can summarily be dismissed as forgeries in a Greek Court of law should excite the interest of the Department of Foreign Affairs and Department of Social Protection.

We are asking the Irish Department of Foreign Affairs to authenticate the documentation and to strongly express our concerns, as an Irish family, regarding the violation of my husband’s human rights, to the Greek Government and the European Parliament.

Justice For Mark and Andreas

Thanks Miriam Cotton and Julie Marku