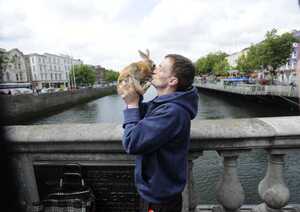 Remember John Byrne and Barney the rabbit (above)?

In July of last year, homeless man John was forced to jump into the Liffey to save his pet rabbit, who had been tossed over O’Connell bridge by a teenager.

Today, Gary Kearney was sentenced to four months in jail for animal cruelty after he pleaded guilty to the charge in Dublin District Court.

Bunny In The Oven