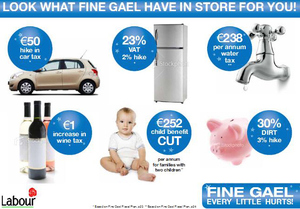 The problem for Labour is that the party made so many promises in the run-up to the last election. In particular the party produced a poster suggesting that many of the items in yesterday’s Budget, including a cut in child benefit, higher prescription charges, increased student fees and even a rise in the price of a bottle of wine would come to pass if Fine Gael won an overall majority.

Instead the two parties went into government with the biggest majority in the history of the State, and most of the things Labour accused Fine Gael of wanting to do have now been done by the two parties in government.

It is always difficult for a party to convince the electorate that worse might have happened if it were not there, but that is a recurring problem for Labour.

Shame. And they were doing so well, too.

Now THIS Is How You Debate A Budget