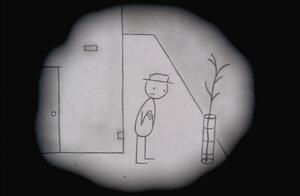 ‘Everything Will Be OK’ – the first chapter of ‘It’s Such A Beautiful Day’ by independent animator Don Hertzfeldt, whose films have been described as ‘Looney Tunes directed by Franz Kafka’.

Created in three parts over five years, the film stars a stick figure called Bill who, despite the childlike simplicity of his rendering, you’ll find you care about.

All three parts are available on DVD from Hertzfeldt’s website.

The Best Animated Film Of The Year (Slate)