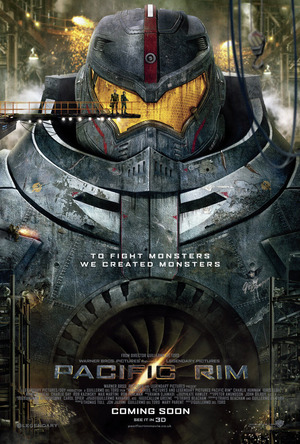 1. We showed you the teaser trailer the other week; now here’s a first proper gander at next summer’s monsters vs. giant robots epic. They’re already planning the sequel.

2. If there’s a rousing speech to be given, let it be given by Idris Elba, a man so cool that in 2013 he emerged from both Prometheus and an appearance on Brendan O’Connor’s Saturday Night Show with his dignity intact, nay enhanced. The latter, lest we forget, also gave us the finest random Twitter pic of 2012: Stringer Bell reveals Donegal roots.

3. Pacific Rim director Guillermo Del Toro was supposed to have directed The Hobbit, but bailed at the last minute, and did this instead. The Hobbit could definitely have done with a few giant kick-ass robots and/or Idris Elba.