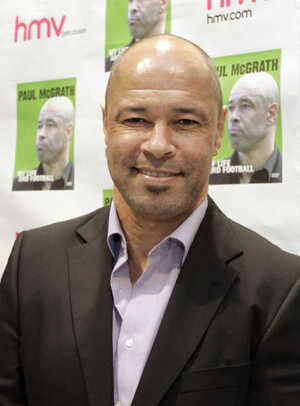 Paul McGrath (above) was tweeting at the weekend about the game between Manchester United and Liverpool. His tweets included criticism of Liverpool defender Glen Johnson. McGrath was then sent a small number of tweets taunting him about his drink problem and this morning he went on Ryan Tubridy’s 2FM radio show to discuss the matter.

The interview in which McGrath apparently sounded drunk has been cut from RTE’s playback version of this morning’s show.

Ryan Tubridy: “Lot of people inquiring after Paul McGrath. To be honest with you, I don’t know what the story is, other than, I wasn’t, he literally came on the phone, I thought we were going to have a bit of banter about what happened with Twitter yesterday. But lots of people want to wish him well and see how he is.
I don’t want to judge him or comment on what the story is, because I don’t know. But what I am gonna do is I’m gonna call him later on in my own time and see how he is, and see how he’s getting on.
Cause we spoke to him earlier on in the morning, you know, around 8-ish. And he was absolutely fine and we wouldn’t have put anyone on who wasn’t other than, maybe, in the mood to come on, shall we say.
We certainly got the impression that all was well in the world and that’s why he was put through. And, you know, I interviewed Paul on the Late Late Show last, I think it was last season. And he was, you know, you couldn’t meet a nicer, more gentle man. You know that expression ‘a gentleman’, he’s both a gentleman and a gentle man.
And he’s happy to chat away, as you know, on Twitter, no matter what they throw at him. And he’s, you know, he seems to be up for that. But he is loved by people in this country. He’s a national treasure, he’s an icon, he’s a hero.
And that’s why a lot of people are just wondering how he is, and I’ll get back to you on that as they say, and I’ll talk to him. But I’ve been looking at the texts and it’s almost like people a family relative needs to be asked after and that is what we’ll do. I’ll make that call later on.”

No Sign Of THAT Ryan Tubridy Interview With Paul McGrath On The RTÉ Website (Balls.ie)
(Photocall Ireland)
Sponsored Link