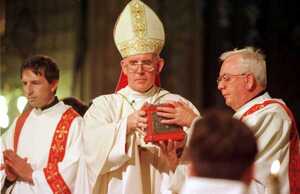 Gavin Jennings: “Some big news expected this morning on the Irish Catholic Church at around noon, Rome time?”

Michael Kelly: “Noon, Rome time. 11 o’clock Irish time, Gavin. They’re going to announce that Cardinal Sean Brady is to be replaced as Primate of All-Ireland and Archbishop of Armagh. Now, it won’t be a straight replacement, it’ll be a phased job if you like. What they’re appointing is, what’s known as a coadjutor archbishop.”

Kelly: “That’s someone who will shadow the cardinal in the short term but eventually will take over. They have a  right of succession so they’re not like an auxillary bishop like that we would have in many diocese around the country that are assistant bishops, they just assist the bishop. This is someone who has the right to succeed the cardinal and probably will do so very, very quickly.”

Jennings: “The last time that we’ve had cardinal coadjutors: 2003, when Diarmuid Martin came in as one to Cardinal Desmond Connell. 1994, when Sean Brady was appointed coadjutor to Cardinal Daly. In both cases, Connell and Daly were the subject of criticism because of their handling of child sex abuse scandals. The Vatican is following course again?”

Kelly: “This is the Vatican’s way, if you like, when a bishop becomes extremely wounded – as Cardinal Brady is; as Cardinal Connell was, at the time, when Archbishop Martin came home from Rome. If you like, it’s a way to allow the person to be replaced, to, if you like, to, for their resignation to be accepted, but still they can go at a time of their own choosing so this new person, who will be appointed today, will shadow Cardinal Brady, probably for a period of three or four months. Archbishop Martin was a lot longer in the wings than he had been expecting and I think a lot of church people had been expecting. But I think Cardinal Brady will be replaced definitively within three or four months. Already he’s disengaged from a lot of ecclesiastical stuff, he’s been very vocal obviously on the issue of abortion. And the Vatican knows, the church knows, that this is something where they need someone with a lot of moral credibility.”

Jennings: “Michael, who do you think it will be?”

Kelly: “It’s very, this is one of the most tight-lipped things that has been in recent times, in the church.”

According to a report in today’s Irish Times Brady will be leading a church group in a meeting with the Government today. The agenda is expected to include abortion legislation, school patronage and the divesting of Catholic-run schools to other patron bodies. ‘

Previously: Brady And The Victims