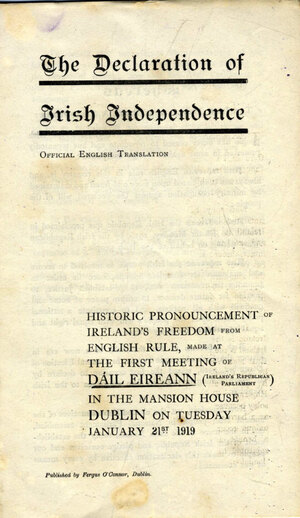 It comes around so quickly.

Having proclaimed her Independence at the first Meeting of Dail Eireann, in the Mansion House, Dublin, on January 21, 1919, this address was then sent out to the “free nations” of the World.

‘Whereas the Irish people is by right a free people: and whereas for seven-hundred years the Irish people has never ceased to repudiate and has repeatedly protested in arms against foreign usurpation… Now therefore we, the elected representatives of the ancient Irish people in National Parliament, Assembled, do, in the name of the Irish Nation, ratify the establishment of the Irish Republic…”

Not Worth The Paper It Was Written On