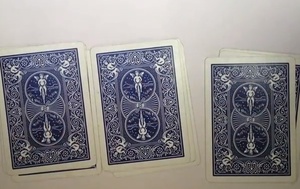 A foolproof card trick invented by magician Jim Steinmeyer and demonstrated by BoingBoing’s Mark Frauenfelder, who found it on the Futility Closet Blog:

Go on. Get the cards.

Pick A Card. Any Card

Would You Give This To You’re Child?