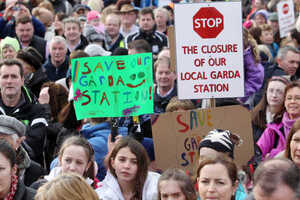 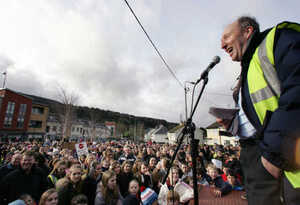 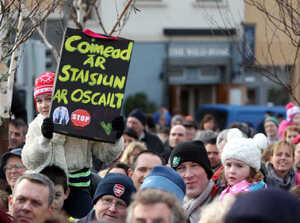 (Above: the protest outside Stepaside Garda Station yesterday)

Shane Ross, Independent TD for the area, told the crowd yesterday the four other TDs were “duty bound to support you in this mission”.

“I would urge you to block up the telephones and the emails of the Department of Justice so they can’t do any business and they’ll realise what the depth of public opinion is here,” he said.

But in a statement hours later Mr Shatter said Stepaside Garda station was among those identified in the Garda Commissioner’s policing plan for closure and he was not going to “second guess” that assessment.

“I have not done so in the context of Garda stations to be closed in other parts of the country and neither will I do so in my own constituency,” he added.

Presumably, all operators are busy at present and your call will be answered in strict rotation.

The Shatt Sat On The Matt