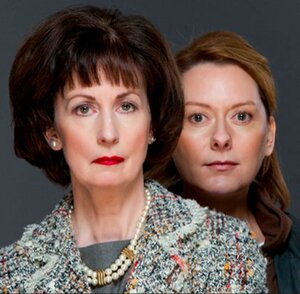 Cathy Belton and Ingrid Craigie in The Housekeeper

…But director Lynne Parker pulls back from the delicious tang of the fantastic, with a production emphasising physical and moral atrophy; characters often address each other across chilly chasms of distance on Bláithín Sheerin’s partial set, and every utterance echoes through the space…

…Had it intruded on more fully fleshed characters or pushed towards the summit of tragedy, we’d have a deeper investment, but this feels less like a committed occupation than a swift, diverting trespass.

How Are Thy Leaves So Verdant