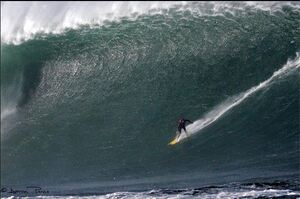 Fairly cool dads, though, in fairness

Mullaghmore {Co Sligo] is now on the world Map of big wave riders looking for their XXL nomination. This is all good but stoked to see Peter Conroy claiming the barrel of the season so far while Daithi Lavelle pictured (above) surfed the biggest barrel i have ever seen out there a few years ago. Lots of talk of big wave guys having to dedicate themselves etc etc both these guys are just regular Irish guys who have to juggle jobs, families etc just to get the time to get out there never mind train. Funny thing about this photo is that Daithi got out there early on the low tide while others were waiting for it to mellow out with the higher tide. Not because he was proving a point but because he had to pick up the kids from school after.

A Little Summit Left Behind