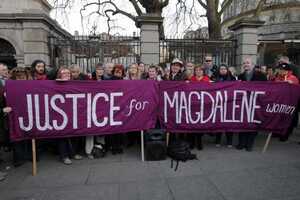 Two nuns who were involved in running Magdalene laundries have hit back at criticisms of the four congregations which operated the 10 such institutions in Ireland up to 1996.

In interviews to be broadcast on RTÉ Radio 1’s The God Slot at 10 o’clock tonight “Sister B” said: “All of the shame of the era is being dumped on the religious orders.”

When asked whether an apology might be appropriate after the McAleese report on the laundries, “Sister A” responded, “apologise for what?”

Now, now, don’t dress it up in vague platitudes, sis.