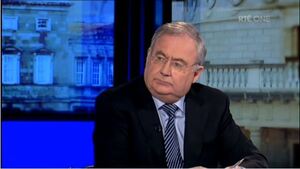 Last night The Week In Politics followed up on a Sunday Business Post’ story in which it was revealed the banks plan to set quarterly targets for restructuring mortages, likely to involve 20,000 mortgages every quarter.

Reporter Brian Dowling said the latest Central Bank figures show there are almost 95,000 households in mortgage arrears for 90 days or more, with 23,000 of those in arrears for two years.

Economics Professor Gregory Connor, from Maynooth University, told the programme the repossession rate in Ireland, which saw 134 properties repossessed in the last three months of 2012, is just one twentieth of what it should be.

Pat Rabbitte (above) said: “The issue is coming to a head. The Government is likely to, perhaps it’s no longer a secret given it’s on the front page of the Sunday Business Post to publish a mortgage plan in coming days that will set out targets for the banks, because in the interest of getting the economy back to normal, we have to confront this issue. But the proposition that you’re going to have 95,000 people on the streets, put out on the streets, is complete, absolute nonsense.”

He said repossessions will be “inevitable” but only as “a final resort”.

Meanwhile, in the buy-to-let market the Irish Mail on Sunday yesterday reported that “a strict confidentiality agreement is being forced on buy-to-let mortgage holders” with AIB, (99.8% of which is owned by the State).

The report, by Ken Foxe and Warren Swords, stated: “The secret document obliges mortgage holders ‘not to disclose to any third party the fact that negotiations are taking place’ on restructuring the mortgage.”