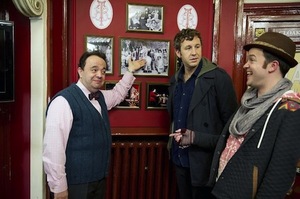 What you may need to know:
–
1. Big Boyler Chris O’Dowd just won’t stop: there’s a new series of Moone Boy in the can, talk of an IT Crowd special AND this new BBC/HBO co-production.

4. Now you know why O’Dowd has been rocking the beard – clean shaven, he looks about 12.