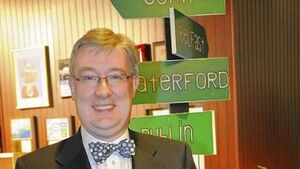 The contribution to Blackrock College accounted for 13 per cent of the American Ireland Fund’s total grants of €17.3 million to organisations across the island of Ireland in 2011. Chief executive of the AIF, Kieran McLoughlin, said: “It would be inaccurate to make a judgment of the fund’s educational policy on the basis of one recipient.

What school did Kieran attend?

Clue: he turned his school tie into a sweet bow (above).

Blackrock College receives €1.8m from US organisation over five years