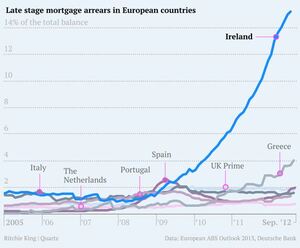 Our problems are only starting, says Matt Phillips in today’s Atlantic.

“Ireland’s homeowners are the European and perhaps the world champions in not repaying mortgages. The country’s national debt has increased fourfold in about as many years. Its banking system is being kept afloat by borrowing from Europe. And while a change in the law may soon force the banks to start cleaning up their balance sheets, nobody is quite sure how bad a mess they will find there when they do. Welcome to Ireland, where the hangover is in fact just beginning.”

On home repossessions, he adds:

“The simple answer is that Ireland is one of the hardest places in the world to drive a family from its home. Though thousands aren’t paying, repossessions of Irish homes remain “negligible relative to the level of arrears,” according to a recent report by Moody’s analysts.”

“The most recent update on repossessions from the Irish central bank shows that during the entire fourth quarter of 2012 only 38 houses were repossessed by court order. At a pace like that, it would take more than 620 years to get through the backlog of nearly 95,000 mortgage accounts that are at least 90 days behind on payments.”

“Moody’s suggested that the increase was driven–at least in part–by some who are gaming the system. “The current dearth of repossessions and the recently proposed personal insolvency legislation is starting to result in higher defaults due to moral hazard,” the analysts wrote.

That’s financial-speak for “people think they can get away without paying their mortgage because they know they’re not going to lose their house.” Gregory Connor, a professor of finance at the National University of Ireland in Maynooth, estimates that about 35% of those who have fallen into arrears on their mortgages have done so “strategically.” That is, they can afford to pay, but just aren’t.”

On a loophole in Ireland’s foreclosure law:

“Ireland’s European lenders–the EU, the IMF and the ECB–know that the surge of bad mortgages is exposing them to increasing amounts of risk. And they don’t like it. In fact, in their latest report card on Ireland’s bailout program, they laid out steps the Irish government had to take to update the loophole in the 2009 foreclosure law, the one blamed for holding up foreclosures and repossessions. Those changes to the law are to be made “so as to remove unintended constraints on banks to realize the value of loan collateral.” In other words, the troika is telling Ireland to make it easier for banks to repossess and sell properties. Irish legislators are expected to pass a revamped law removing the loophole this summer.”

On why our debt could be worse than we think:

“And even if Irish banks do start dealing en masse with problem loans, it’s unclear how it could play out. On the one hand, it could mean more people in Ireland start to pay their mortgages, for fear of losing their homes. But a large wave of bank foreclosures could also “throw up evidence of under-reserving by banks as they start to close out some nonperforming mortgages,” according to a January report from Standard & Poor’s banking analysts.”

“In other words, it could reveal banks to be in worse financial shape than everyone thought. By extension, Irish taxpayers, the Irish government and its European rescuers would have to admit they face more risk than they knew. That would be a major embarrassment for both the Irish government, as well as its euro-zone sponsors, which have built up Ireland’s reputation as a debtor nation doing everything right.”

Welcome to Ireland, Where Mortgage Payments Are Optional and the Banks Are a Mess (The Atlantic)