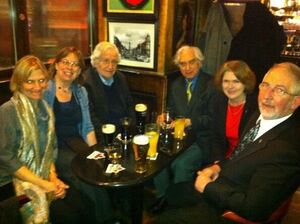 No Certificate of Irishness though.

Noam Chomsky having a tipple with Mary Lawlor, founder and director of Front Line Defenders (in red dress), at a Dublin pub tonight {location unknown] 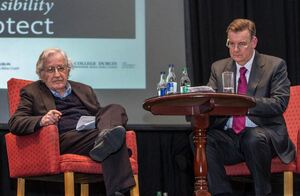 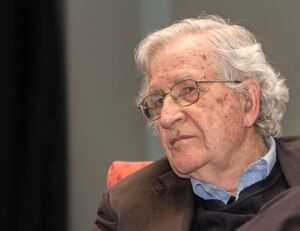 Chomsky at the RDS, Ballsbridge, Dublin, this evening, where he was interviewed by Bryan Dobson and took questions from the audience.

On foot of being asked about the austerity measures being imposed on Ireland and across Europe, Chomsky said there’s no question austerity is destroying the social fabric of Europe and pointed to an interview ECB president Mario Draghi gave to a reporter with the Wall Street Journal.

He quoted Draghi as saying the social contract in Europe is dead. He said the destruction of the social fabric is a “predictable consequence” of the programs that are being carried out, saying austerity measures being implemented at a time of recession or stagnation leads to “disaster”.

In relation to Ireland, he said: “The policy here is to bail out the criminals and let the taxpayer take the burden. This is pretty much the same everywhere but it’s extreme in Ireland.”

Chomsky also recalled a request made by the left-wing Syriza party in Greece last September, in which head of the party Alexis Tsipras asked for the EU to do for Greece what Greece did for Germany in 1953 – write off a large portion of its debt after the war. “That would be a sensible policy, ” Chomsky said.

Another member of the audience asked about the controversy surrounding the Royal College of Surgeons in Ireland and their lack of support for three Irish-trained medics who were arrested in Bahrain.

The RCSI has a medical campus in the city since 2004 and the three medics were arrested during the Arab Spring when there was a crackdown on pro-democracy rallies.

The RCSI contributes about €70million to Bahrain. The lady asked how Ireland could act responsibly without affecting their medical credibility. Chomsky said: “The only way to do it is to organise active effective public opinion.”

He also warned about surveillance drones being the size of flies, how US President Barack Obama has punished more whistleblowers than all the previous US administrations combined and highlighted out Ireland was one of the 54 countries
which were complicit in the CIA’s global kidnap, detention and torture programme after 9/11.

He said people shouldn’t pay any attention to terrorist lists, pointing out that Nelson Mandela was deemed a terrorist until four years ago, and he warned trade unions are under threat, just as democracy is under threat.

He then put on his coat and asked : “Where the chicks at?”

Sure What Would Noam Chomsky Know Anyway?