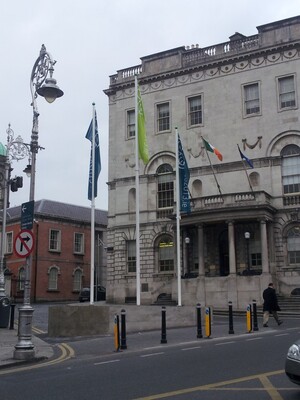 The slab at Dame Street and Lord Edward Street outside Dublin Castle.

Siobhán Maguire, of The Sunday Times, reported (behind paywall):

“A controversial grey slab of concrete built as a traffic calming measure outside Dublin City Hall will cost €4,000 to remove, according to the city council. The much-criticised object cost €15,000 to build. Details obtained under a Freedom of Information Act request show the council is planning to soften or beautify the “temporary” structure. The offending object is made up of a row of bollards with a concrete structure used as a ballast for three flagpoles. Councillors have queried why it was built without planning permission.“

Anyone got a Kango?