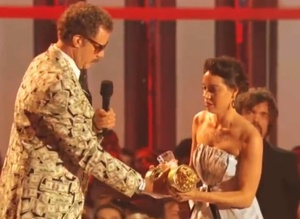 Parks and Recreation actress and comedian Aubrey Plaza attempts an abortive Kanyebomb at the MTV Music Awards on Sunday, attempting to steal Will Ferrell’s award, failing and returning awkwardly to her seat.

Asked about the incident later, Ferrell responded: “I think she wanted to tell me something important. It was just a lot of hot liquor breath and sweat. Then she ran away.”

MTV insists the stunt was not pre-planned.

Will Portman and Natalie Ferrell