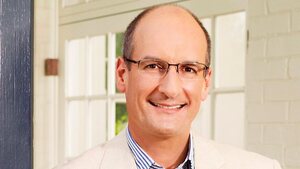 And he’s in a right old Sammy Sausage.

Sunrise co-presenter David Koch made the comments on Tuesday morning’s broadcast, after two explosions at the Boston Marathon.

In the segment, co-presenter David Koch is heard to ask futurist Kevin Suter if it is a “long bow” to suggest a link between “a very big Irish Catholic city”, the former British prime minister’s impending funeral, and the attack.

Tribute To The Runners