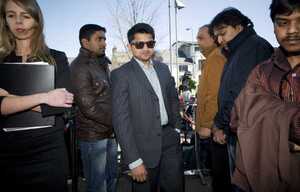 #Savita Inquest: Coroner tells Praveen. You showed tremendous loyalty & love to your wife. All of Ireland followed the case.

#Savita: Coroner says verdict does not mean deficiencies or systems failures contributed to her death. 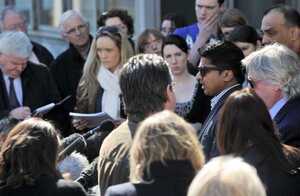 Praveen Halappanavar, spoke to the media after the verdict. The following is a transcript of some of what he said. The reporters’ questions were inaudible from RTÉ’s report and therefore couldn’t be transcribed.

On remaining questions:
“There are still some questions that need to be answered. I’m still not convinced, or, you know, I haven’t got my answers yet why Savita died. I do have responsibility. I mean Savita’s parents, I owe it to them, I owe it to Savita. They want to know the truth so I will, I will get to the bottom of the truth and there is no way in looking back and I haven’t really thought about going back (to India) at the minute.”

On the inquest jury:
“Well, in fairness, you know, the jury is like a layman, people who don’t have any medical background or..I guess I am, you know, in a way, I know where they are coming from, it’s not that easy to understand the guidelines and you know to go through all that, you know? It’s been a full, busy week of inquest, so, yeah, I understand the complexity of it.”

On potential further action:
“Well, of course, as I said it’s not, you know I haven’t got all the answers yet so I will, you know, take it further.”

On accountability:
“Basically, that’s what the family wants, you know? I was talking to Savita’s father, he was asking me, somebody has to take the responsibility. When a patient walks in, you can’t just blame, you know, the midwife blames the consultant, the consultant blames the law. It’s never going to end, you know what I mean? So, somebody has to take the ownership of a patient when they walk into a hospital.”

On the gardaí, coroner and jury:
“Also I’d like to take the opportunity to thank the gardaí, the coroner and the jury. I know it’s been a very, a busy week and a very busy schedule aswell also. And also I’d like to thank all my friends, you know, I think I’ve been very fortunate enough to have some of the best friends. You know, I never thought I could come this far without the support from the guys. And yeah, thank you.”

Dr CVR, a friend of the Halappanavar family added:

“Just on behalf of Praveen and Savita’s friends, I’d like to thank the coroner and the jury and the gardaí for what they have done, for their time and patience and their effort. And, it’s still mind-boggling to all of us, how a person goes into a hospital, walking, and comes out in a box, for something that was an entirely preventable death. And as Dr Peter Boylan also stated, you know, her life would have been saved. The role of hospitals or medical personnel is to change the natural history of the disease and that didn’t seem to have occurred, you know? The …..without significant intervention. So, we don’t have Savita today. And, if she was treated properly, I mean this has nothing to do with pro-abortion or anti-abortion or anything like that. You know, all she wanted, all she needed was treatment. If she was treated properly, we wouldn’t be here. We would be doing something else today. Thank you.”

Update: Praveen Halappanavar: “you lose your rights basically when you are pregnant” in Ireland (Kitty Holland, irish Times)