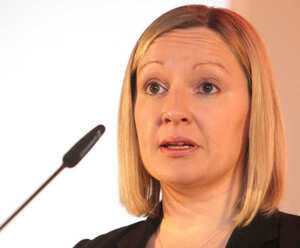 On RTÉ’s Drivetime on Tuesday evening, Olivia O’Leary, above, spoke about Ireland’s abortion laws. During her radio column she called on the Irish government to ‘kick the Taliban out of the Constitution‘.

Some took that personally.

“The debate on abortion became a bit surreal this week. Olivia O Leary in a radio piece on Tuesday urged that we “kick the Taliban out of our constitution” while proclaiming that “Ireland is no country for young women.”

“I beg to disagree. I am a relatively young woman and I consider Ireland to be a fantastic, safe, free and open country in which to live. I am proud of my country and I will defend Ireland to the last. We are extremely fortunate to live in a country where human rights are protected by a constitutional and legislative system which is second to none.”

“To compare Ireland or our Constitution to the Taliban is grossly misleading. Olivia O’Leary should, and I’m fairly sure does, know better. Could she really believe that the Shia women of Mazar-e-Sharif, whose husbands were executed and had their throats slit before their eyes and those of their children, would agree that Ireland is a terrible, oppressive place to live? Many of those same women saw their children stuffed into containers and sent to unknown destinations, left to suffocate in a slow and painful death. Would those women, I wonder, condemn the Irish legal system which strives to protect the lives of all children?”

“Does Olivia also wish to compare Ireland and our treatment of women with the Taliban leaders who routinely abduct women and sell them into sex slavery like animals?

“I would kindly ask Olivia O’Leary and the many other people who have been using this Taliban analogy in recent days, to take the trouble to inform themselves.”

“Perhaps read the chilling report ‘The Taliban’s War on Women’ which was published by the organisation Physicians for Human Rights. It graphically outlined the total oppression of women in Afghanistan by the Taliban, with over 50% effectively under house arrest, with no freedom to travel, to drive a car, to wear what they choose, marry whom they wish, with no sexual freedom or economic freedom or any real freedom.”

“She should reflect on just how lucky we are – how privileged we are to live in the free, open, caring, tolerant society that is Ireland. And perhaps reflect on how much we take this for granted.”

“I respect the views of the many people who disagree with me on the question of how we should handle the issue of abortion. But I cannot respect the sort of hysteria and incitement which poured forth from Ms. O’Leary on RTE radio the other day. You may want abortion to be brought in Olivia, but please do not suggest that ours is a country comparable with one ruled by an Islamic fundamentalist terrorist movement. Get a grip.”

“For my part, I am genuinely trying to have a reasoned and rational debate on this issue.”

“I hope that, notwithstanding the strong and genuinely held views on both sides of the debate, we can respect the right of everyone to speak freely and honestly about their hopes and their concerns.”

“I fully support steps (regulatory or legislative) to give certainty to pregnant mothers and doctors in cases where there are medical complications and a woman’s life is at risk. That makes absolute sense. Why would I, or anybody else, want to see a woman’s life endangered in any circumstance?”

“I do have concerns about the proposal to legislate to for suicide as a ground for abortion. Legislating for suicidality worries me, because as 113 consultant psychiatrists said clearly today, such a step has “no basis in medical evidence”. Surely we should legislate on the basis of medical facts, and be guided by the experts who know their patients and their conditions better than anyone else.”

“The statement of the 113 consultant psychiatrists reads:

“As practising Psychiatrists we are deeply concerned at the Government’s stated plan to legislate along the lines of the X-Case, as this will mean legislating for suicidality. We believe that legislation that includes a proposal that an abortion should form part of the treatment for suicidal ideation has no basis in the medical evidence available.”

“I have been accused repeatedly of being some sort of a fanatic or fundamentalist. Anyone who knows me – my friends, my family, my colleagues – knows that is simply nonsense. For the record, I do not come to this debate with any religious or idealogical ‘hang-up’. Like 85% of the population I have been brought up as, and describe myself as a Catholic. I am not a particularly devout one and I am not diligent in attending religious ceremonies. So I suppose I am like most Irish Catholics in that respect.”

“My support for human life is not based on any blinkered ideology. When I was a student, I would have regarded myself as liberal on the issue, being in favour of abortion. I suppose I simply bought into the accepted notion that a foetus is simply an extension of a woman and not a person.”

“However, I have come to believe that I was wrong. And I don’t change my view lightly. My opinion is, I suppose, shaped by a number of factors, personal experience with family members and friends, a more objective analysis of the arguments on both sides and of course the facts, which are all important. The clear view of those practising psychiatrists is most convincing. I cannot ignore either, the very compelling experience of having dealt with so many parents going through adoption procedures, who have been through IVF and are doing everything they can to support human life. Life is precious. We cannot change that.”

“I personally consider this debate, on a very basic level, to be a human rights issue. It is about the human rights of women and of their unborn babies. The fact that a baby is not born does not mean that it is not a life and therefore worth defending. There is a great irony in the fact that we throw all the resources in the world (and rightly so) at saving the life of a premature baby born at 23 or 24 weeks, and yet some may consider the abortion of that baby, at the same stage to be right and just. I don’t.”

“I oppose all intentional taking of human life. I consider the use of the death penalty to be barbaric because essentially it bestows on certain human beings a higher power to determine the right to life of other human beings. I think most of us agree that no person has the right to end the life of anyone else. If we somehow modify that basic core value of humanity, then we start to calculate human life in terms of worth. Is your life worth more than mine? If you are “unwanted” are you fair game? Is one life somehow ranked higher than another? If so who decides? And where does this ranking of human beings end?”

“For me this is a very important core question – whether we choose to protect the fundamental rights of all people, men and women, young and old, babies and adults. Whether we do or not very much informs how we view abortion.”

“I am so glad that I live in a country which does defend life with the full rigour of the law. I accept that there is a need to provide clarity for doctors so that they can ensure that they legitimately defend the lives of pregnant women without fear of legal or criminal sanction. I believe that the medical profession has done this admirably for a long time, within the parameters of the existing Medical Council guidelines. I have no fear of the Oireachtas giving legal underpinning to this. It is of course, also in full alignment with our clear constitutional obligation under Article 40.3.3 to defend and vindicate the rights of the mother and unborn child equally.”