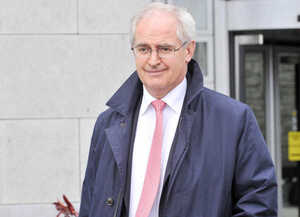 Former Master of Holles Street Hospital in Dublin, Dr Peter Boylan, top, and Breda O’Brien, above, a patron of Iona Institute and Irish Times columnist, were among the guests on RTÉ’s Marian Finucane this morning.

They spoke about the death and subsequent inquest of Savita Halappanavar.

Here’s how it unfolded:

Marian Finucane: “Explain how you got involved in the hearings in Galway, last week.”

Dr Peter Boylan: “The coroner wrote to me and asked me would I review the notes and the statements and issue a report to him, so that’s it basically.”

Finucane: “And that was it. And were you there for the whole thing?”

Boylan: “No, I got the transcripts every night but I wasn’t present. I only went down to give my expert evidence on Thursday.”

Finucane: “Right. And your conclusions?”

Boylan: “My conclusions are that if she’d had a termination on the Monday or the Tuesday, she would now be alive. That by the time…”

Finucane: “This is Savita. Just to…”

Boylan: “Yes. By the time a termination became legally realistic prospect, she was becoming seriously ill. And even if they’d started a termination on the morning of the Wednesday that it was too late at that stage. I did identify a number of deficiencies in the care but none of them individually contributed to her death, in my opinion. And, the question of a surgical termination was brought up in some of the media, during the course of discussions since the finish of the inquest. And I don’t want to be graphic about what a surgical termination means at 17 weeks for the live foetus but there’s a very high likelihood that she would have died as a consequence of having had a surgical termination at that stage because…”

Finucane: “On the Monday or the Tuesday?”

Boylan: “No. On the Wednesday.”

Boylan: “You couldn’t do a termination on the Monday or the Tuesday in this country. It’s just, it was not legal.”

Finucane: “Yeah, I must have misheard, I thought I heard people, on both sides, saying that if a miscarriage was inevitable that then there would…”

Boylan: “The clinical circumstances in which she was, with ruptured membranes at 17 weeks, the chances of survival for that baby were absolutely very small, less than 10%. There are incidences however, well-recognised in this country and internationally where babies in those circumstances can survive. They get to 34 weeks maybe or even later…”

Boylan: “She was 17. Yes but a pregnancy, even with ruptured membranes, can continue. It’s highly unlikely. It’s not inevitable that she would have a miscarriage. Now what would have happened in another country is that on the ward round, when she ruptured her membranes, the dismal outlook for the baby would have been discussed with her. And her input into the management, and her husband’s input into the management, would have been taken into account. We can’t do that here. And what would have happened is she would have said one of two things. One: ‘I’d like this pregnancy to continue as long as possible as I dearly want a baby and we want to do everything possible’. That might be say in the circumstances where the mother is in her late 30s/40s, it’s an IVF pregnancy and so on. Not very much different. Or she might, she could said ‘Look no, the outlook is so dismal, I’d like just to have, get this pregnancy over with, in other words terminate it, and then move on and perhaps get pregnant again soon. Her wishes would have been taken into account in any other country. Now what would have happened then is that they would have said to her ‘Look, have a think about this because these are very big decisions.”

Boylan: “And they would have come back to her the next day, or later the same day, or they might be absolutely certain what they wanted to do. And then, whatever it is that they wished would be undertaken. In any other country.”

Finucane: “Again, just listening to the, to the evidence, I presume every person operates to the guidelines, you know, according to the law.”

Finucane: “Yeah, yes, yeah. But the notion of percentages.”

Finucane: “Does that happen? A lot?”

Boylan: “No. And we cannot, as doctors, be expected to do our ward rounds with a calculator in one hand and the law in another hand. We have to be given the liberty to do what we feel is best for a patient and in this…These circumstances are the only circumstances in obstetric care where a woman’s wishes are not taken into account. Where she has no input into her care. Now if you think of any other sort of situation like that you end up talking about the Taliban. Where else are women denied an input into their care? In what other clinical situation? I can’t identify any. Women are very much involved in their care in obstetrics, in decisions to induce labour, decisions about Caesarian sections, decisions about all sorts of things. And that’s how it should be. But in this circumstances, they are not allowed. And that’s the law.”

Finucane: “Breda, how did, how did we end up here?”

Breda O’Brien: “I’m really alarmed at a couple of things that Peter has said. First of all that the law would not have allowed intervention on Monday because John Bonner, who would be universally acknowledged to be deeply conservative on this, said he would have gone, he would have been in there like a light.”

Boylan: “I was on Prime Time with him there last night I think it was…”

Boylan: “Friday night. And that’s not correct what he said. He said he would wait until she was ill and then he would have no hesitation in intervening.”

Boylan: “He was very clear about that because I picked him up on that.”

O’Brien: “Can I clarify, Peter? When I said he would have been in like a light I was talking about in terms of the care. The care is the crucial issue here.  I spoke to three obstetricians over the week, two in person and one by email to clarify this point.”

Finucane: “I should clarify that you yourself are a patron of Iona, just for the record.”

O’Brien: “Absolutely, sure the whole country, anyone who knows me knows where I stand on this issue. But it is important to clarify where,  I think everyone should lay their cards on the table, where they stand on this. So, the point I was making was…I communicated with three obstetricians. They said, one of them said that there were glaring signs on the Sunday night which should have triggered a whole series of interventions, in terms of standard, bog standard care.”

Boylan: “On the night she was admitted?”

O’Brien: “They said, that…one of them said to me that because she was fully dilated and…”

Boylan: “I’m sorry…just keep, OK, look, I won’t interrupt you again but this is depressing.”

O’Brien: “OK Peter, and then I would ask you please, don’t please try and given an interpretation of the law which is not borne out by other colleagues. Other colleagues said that if she had received the proper care. Now, it’s extraordinary how the key problem here which was the systems failure, the failure to communicate properly, the cascade of failures in a sense, it’s really noticeable that the recommendations, one said to clarify the Medical Council guidelines, all the others were about failures in the hospital. And by focusing on the fact that it’s the law and that was the problem, rather than the care was the problem, we’re actually deflecting attention away from things that will save women’s lives in the future, which is to get the care correct. And there, I, as I say, spoke to three obstetricians, all practising in Ireland, all of whom have practised in jurisdictions where termination is fully available, and they said they would have intervened earlier and they would have, they would have intervened much, much earlier. Nobody is…”

Boylan: “They would have broken the law.”

Boylan: “And they wouldn’t…”

O’Brien: “Peter, what happened at the Oireachtas Committee hearings? Where Rhona Mahony said that there is no, there is no problem when there is a threat to the woman’s life. I think you’re…”

Boylan: “Absolutely. There is no problem when there is a threat to the woman’s life…in this case, it was too late.”

O’Brien: “I think you’re confusing a real and immediate, a real and substantial danger with an immediate danger. Sepsis is a hugely…And I have a stake in this, and there’s a bizarre thing to admit but I was a miscarrying patient in your hospital in July. So this is not academic for me.

Boylan: “It’s not academic for me either. I’ve spent my entire professional career, saving, not saving, but working to care for women…”

O’Brien: “And I totally accept that, Peter. But what I’m saying is that this, as you said, is your opinion right. I think it’s a deeply-flawed opinion, I think that the fact is…”

Boylan: “So are you saying, Breda. I just want to get this clear for listeners, that it would have been permissable to terminate the pregnancy on the Monday or the Tuesday?”

O’Brien: “If she had received the proper care and they had identified…”

Boylan: “Which is what? What is your colleagues, your obstetrician colleagues identified as proper care?”

O’Brien: “All the things that the inquiry, the inquest identified.”

Boylan: “The only thing that the inquest identified in the first two days as being deficient was the lack of a repeat of a white cell count. That’s it.”

O’Brien: “But that was hugely significant, Peter.”

O’Brien: “Well, according to the people that I have spoken to…”

Boylan: “Well this is good news because if this means then that a white cell count is elevated, in these circumstances…”

O’Brien: “She wasn’t monitored properly. Peter why are you deflecting away from, the attention from the failures..”

Boylan: “Because that’s the problem.”

Finucane: “Well, can I just intervene here because evidence was given at the hearing that it was because of the law.”

O’Brien: “That evidence was given by Peter.”

Finucane: “But the practitioner..”

Boylan: “No, the practitioner herself, the consultant who was looking after her, said she felt that she couldn’t do it. And when she got…”

Finucane: “That was part of her evidence.”

O’Brien: “I think, I think… that she was misinterpreting the law aswell. Once there is a sign of infection..”

Boylan: “This is brilliant.” Laughs. “We’re in the clear now. We can terminate pregnancies on the basis of an elevated white cell count.”

O’Brien: “Please don’t misquote me. If I make…”

Boylan: “…with no other signs of…”

O’Brien: “If I made a mistake, I corrected myself.”

Finucane: “Can I come back to what’s in the papers today, just to move it on.”

Listen in full here (from 32 minutes).