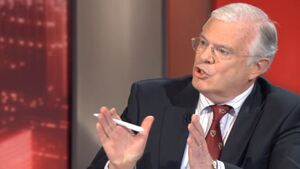 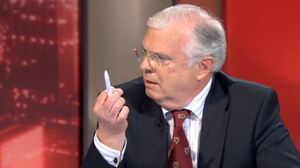 Here’s what he had to say on the Fine Gael party meeting during the week:

Peter Mathews: “I wouldn’t call it a stormy affair, Fergal. It was a concentrated affair where people were anxious that the full expression of the individual members of the party would be available for all to hear at some stage. So it was concentrated.”

Fergal Keane: “You’re reported as having words with the Taoiseach on the issue.”

Mathews: “No. I asked the Taoiseach a question at the invitation of the chairman. I just wanted to know if there would be a party whip, if there was legislation brought forward because I don’t believe that legislation is actually necessary. Em..and the answer to that is and I’m just short circuiting it a little bit was that there would be a party whip. That he didn’t want the division that occurred in the past. Now I wasn’t a member of the party until a month before the elections. But seemingly in the distant past there were times when ah party when when em party whip wasn’t imposed and sort of divisions occurred within the party in terms of ah lobbyists and others targeted members of the party to try and exert pressure or whatever on them. But you know after I heard there was going to be a party whip that unity of expression by the party will be required. I just said “Well it’s clear to me that you know your mind and I know my mind.”

Keane: “And you’re against legislating for suicidal intent as being a reason for abortion?”

Mathews: “Fergal, it’s very simple. As John Bruton said in a letter actually, the constitution is very clear and it’s in plain English. The Supreme Court were shoehorned into dealing with a specific case which by the way and in the strictest terms of logic will never occur again. So when I hear the phrase ‘legislating for the X case’, actually it’s irrelevant, it’s illogical and doesn’t stand up to scrutiny. You can’t legislate for something that was a once-off event and is never going to happen again. As regards suicide, we now know from modern em professional expression that it is,does not, that that suicide intent is not addressed properly by allowing an abortion. We know that.”

Keane: “If this legislation includes suicide as grounds for abortion, will you in conscience vote against it?”

Mathews: “The likelihood is yes. I’m not going to say definitely because if, if ah legislation comes forward and I don’t think it’s necessary. I think that the expression by the Supreme Court judges which by the way was a majority decision. Each of those judges answers their conscience in respect of the constitution and the case at hand that they have to give ah ah judgement on.”

Keane: “You can see yourself as voting against this in a question of conscience, if it comes to that?”

Mathews: “I have to answer my conscience. I have to do what’s right. And by the way, in the United States, in France. People haven’t even mentioned France. In 1975 ah, you know very strict legislation was introduced for the first time on the grounds for lawful abortions. Today in France, a ch..a girl who isn’t even at the age of consent without the knowledge of her parents can go to a GP and have an abortion. That’s how legislation gets amended. Unfortunately, every sort of legislation, history shows, legislation gets amended.”

Fergal Keane to Marie Wilson: “And Peter Mathews when he was speaking to me did make the point, people who are suicidal intent need treatment for the suicidal intent rather than an abortion.”

Previously: “If She Can’t Do It Maybe She Should Decide To Retire.”